For LOW LIBIDO, Chaste Tree Berry increases dopamine activity in the brain which triggers anticipation or urge for sex, and therefore libido. A healthy libido, including desire and arousal, is controlled by brain chemicals called neurotransmitters. An increase in the transmitter dopamine results in a reduction of prolactin release; this helps libido because too much prolactin circulating in a man’s body suppresses his testosterone. To improve sex drive, ample levels of neurotransmitters including dopamine and serotonin, and hormones including testosterone are critical. Chaste berry also encourages testosterone and the pituitary messenger LH, both of which enhance the ability to achieve arousal. 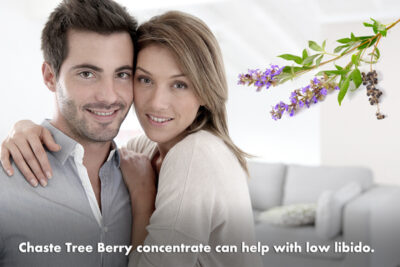 Known in Latin as vitex agnus-castus, the herb chaste berry has been in use since Greek, Roman, and medieval times. Chaste berry is obtained from the dried ripe fruit of the chaste tree, with its first documented use as a healing botanical recorded at least 2500 years ago in ancient Greece. Although also used for women’s health, chaste tree berry acts upon the pituitary of both genders, the master gland which oversees blood hormone balance. It also stabilizes testosterone levels and the pituitary messenger LH, maintaining hormone levels that enhance sexual interest.

Decreased libido and loss of sexual drive are recognized signs of dopamine deficiency, according to the Hormone Foundation, an organization supported by the National Institutes of Health. Dopamine has a marked effect on the desire for sex, via its influence on testosterone levels. Dopamine and testosterone levels move in tandem: If one goes down, typically so does the other. In fact, research studies show that dopamine agonists, meaning substances that behave like dopamine in the brain, can improve libido, even if it was not improved by testosterone alone.

Chaste tree berry, especially in a standardized concentrate, has potent adaptogenic and hormone-balancing benefits. An adaptogen is a botanical that encourages and restores normal function of an organ or body system, by either enhancing a deficiency or calming over-activity; an example of the intelligence of nature. Chaste tree berry helps a man’s body to balance testosterone with estrogen, which men normally make in only small amounts. Limiting estrogen is a highly effective way to support the predominance of testosterone. Estrogen hampers testosterone production for men through a feedback loop which has the hypothalamus cut its gonadotropin-releasing hormone (GnRH) release. If GnRH drops, so does LH, or luteinizing hormone from the pituitary: less LH results in lower testosterone and a slump in libido. Chaste tree berry encourages a man’s estrogen to stay low, in the background, allowing LH and testosterone which boost arousal to be predominant.

Chaste tree berry has dopaminergic effects, meaning that it can attach to dopamine receptors, which then signal that that more dopamine is around in the body. This has been studied in live and in vitro research. Also, chaste berry has notably been shown to bind to receptors inhibiting prolactin secretion.2,3 We know that too much prolactin can suppress a man’s libido and testosterone production. The extreme of this is a condition known as hyperprolactinemia, where the pituitary secretes too much prolactin. This can be an overlooked cause of low libido in men, male infertility, and hypogonadism with erectile dysfunction.4,5

In our clinic, our male patients have achieved excellent results taking a daily dose of chaste tree berry extract. They tell us that they have increased desire, and more sexual thoughts and fantasies, and a greater desire for sexual intimacy. We recommend a formula that is rich in the potent active constituent aucubin in standardized form, along with whole chaste tree berry to provide additional synergistic nutrients from the whole plant that support aucubin’s actions.

Recommendation: Chaste tree berry extract capsules, 400-500mg, with the active constituent aucubin standardized to a high 0.6% percentage, along with 50-75mg of whole chaste tree berry. Chaste tree berry, like all herbs, is best taken on an empty stomach with water or a clear beverage only, such as early morning or bedtime, and away from meals; or as directed by your healthcare provider.