Low Libido is helped by Buffered Vitamin C with Bioflavonoids

For LOW LIBIDO, vitamin C with bioflavonoids balances neurotransmitters and optimizes hormone balance through all phases of the sexual cycle for a robust sex drive. One of the most important organs for a healthy sex life is the brain, as well as hormonal and adrenal balance, and so nutrients that support nervous system health and also physical and hormonal systems can boost libido in multiple ways. 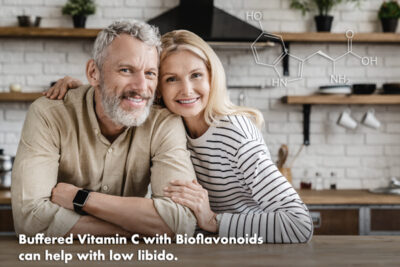 Libido relies on the interplay of many body systems: vitamin C encourages nitric oxide production, which in turn is essential for penile erection.  Studies of tissue levels of nitric oxide on smooth muscle relaxation revealed that penile erection is mediated by nitric oxide.2,3 Men with greater confidence in their erections are known to have higher interest in sex.

As many as 25 million American men suffer from lowered libido and sexual dysfunction in all age groups. This is influenced by the fact that and with aging, nutrient demands increase as metabolic functions slow down and absorption can decline. Increasing intake of crucial vitamins, minerals, and flavonoids can help maintain strong libido and sexual function. Water-soluble vitamin C cannot be stored in the body so it is important to get enough of this robust men’s health supporting vitamin on a daily basis.

Oxidative damage to testicular tissues can impede testosterone production, resulting in lowered libido. Vitamin C is a highly effective antioxidant that protects the body from damaging free radicals and reactive oxygen species: These substances are byproducts of normal metabolism, but their amounts increase from exposure to environmental toxins and pollutants, which is hard to avoid nowadays. Antioxidants are essential to shield cells from oxidative injury, and vitamin C is especially potent. In addition, vitamin C helps the regeneration of other antioxidants such as Vitamin E.

In a study of 120 male workers occupationally exposed to lead in India and rendered impotent and infertile, the men were given ample doses of vitamin C. The researchers noted improvements in libido, and they deduced that this antioxidant treatment offered protection against DNA damage due to reactive oxygen species. Therefore, vitamin C is valuable for helping to strengthen male testicular function and restoring libido.5

Bioflavonoids are plant pigments that give fruits and flowers their colors. Bioflavonoids enhance the absorption of vitamin C and improve its utilization throughout the body. They also have metabolic benefits in their own right: Most importantly for libido, the flavonoid hesperidin helps to increase blood flow to the pelvic tissues, allowing for more responsive sexual arousal. Another bioflavonoid, rutin, strengthens the walls of the entire arterial system, boosting blood flow into the penis, and it also tonifies the veins that trap blood in the penile tissues. Bioflavonoids enhance vitamin C’s absorption and effectiveness, they are a valuable adjunct treatment for libido and magnify vitamin C’s benefits for sexual prowess.

In our clinic, we choose water-soluble vitamin C in a buffered, low-acidity potassium-magnesium blend that is gentle on the stomach, with a low pH of ideally around 4.2. This form is highly absorbable, and very rarely causes loose stools, unlike other vitamin C formulas. Bioflavonoids are a crucial component of the vitamin C complex found in nature. We like to include them with vitamin C as these plant pigments enhance the absorption of vitamin C, improve its utilization throughout the body, and bring additional benefits for libido.

Recommendation: Buffered vitamin C 1,000mg, buffered with magnesium and/or potassium, and including citrus Bioflavonoids 100-200mg, one to three times daily with any meals, or as directed by your healthcare provider.