For LOW LIBIDO, focused endocrine support with an Ashwagandha-Eleutherococcus-Rhodiola formula heightens sexual interest, increases energy, and boosts sex drive by relieving stress. Rhodiola rosea, to use the Latin botanical name, is a particularly potent herb that has been used for centuries to reverse adrenal depletion that can inhibit healthy sexual urges. Adrenal fatigue resulting from long-term stress or exhaustion can severely dampen a man’s libido. Rhodiola is a traditional remedy that brings a significant benefit to male sexual arousal by helping to replenish adrenal stress reserves, which in turn leads to increased sexual responsiveness. 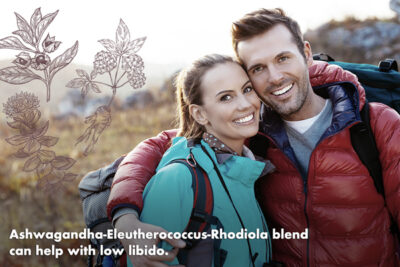 Rhodiola has been a popular sex-enhancing herb often given as a wedding gift to couples for centuries in Europe and the east. This “adaptogenic” herb has been widely used in traditional Chinese medicine, as well as in Scandinavia and parts of modern day Russia, for stress and also for enhancing intimacy and desire. Hundreds of years ago, Viking warriors used herbal formulas including rhodiola to improve their physical performance on the battlefield, and their romantic prowess in the bedroom.

Adaptogens are plant-derived compounds that encourage and restore normal function: They can either reverse and improve a deficiency or calm over activity, depending upon what the target organ needs: an example of the intelligence of nature. Adrenal adaptogens are botanicals that support stable cortisol and adrenal hormone output, normalize endocrine function and support adaptation to environmental stress. They also stabilize brain chemistry and emotional health. Rhodiola in particular is an adrenal supportive herb that enhances lusty feelings, partly because of its benefits for allowing the body to maintain ample hormone levels, increase energy and resilience, and improve sleep quality.

The adrenal glands naturally secrete cortisol, which is essential for life and maintains healthy blood pressure, blood sugar, muscle tone, and prepares the body for action. However, if the sympathetic nervous system is pushed into overdrive and stress hormone levels climb too high, excess cortisol can lower the amount of testosterone in circulation. For men, this combination of high cortisol and low testosterone can dampen libido. Rhodiola and remedies that stabilize adrenal cortisol output will encourage a healthy sexual appetite and steady testosterone levels.

The action of rhodiola is enhanced by other supportive botanicals such as astragalus, and by optimal amounts of vitamins B5, B6 and C. These vitamins are necessary cofactors for the adrenal glands to make correct amounts of their stress-balancing hormones. By relieving stress and boosting energy, rhodiola and these synergistic nutrients further support a healthy male libido

Rhodiola, also known as golden root, has been used for centuries in the traditional systems of medicine in Europe and Asia, most importantly as an anti-stress and adaptogenic agent and for its benefits for enhancing sexual desire. The primary compounds of rhodiola are rosavins and salidroside: These work on human biochemistry to increase “nuclear translocation of DAF-16,” which is a common and needed response to stress.1 Rhodiola supports a healthy libido directly, and also indirectly by nourishing the adrenals to help the body react to stress in the best way possible.

A 2016 open-label, non-randomized study of 1,375 subjects with low libido and life‐stress symptoms confirmed the therapeutic effects and safety of treatment with Rhodiola rosea extract. After just four weeks, all measures showed clinically relevant improvements in sexual impairment, as well as stress symptoms, and overall life functions, and therapeutic effect.2

Rhodiola rosea extract has been shown to boost low sex drive in several scientific research studies, published in the Journal of Sexual Medicine and also the Journal of Phytotherapy Research. Results indicate that rhodiola can enhance libido both men and women, especially if loss of sexual interest is exacerbated by stress.3

Several other important botanicals can magnify the benefits of rhodiola for libido: Ashwagandha is a mighty medicinal herb, and one of the most important botanicals in Ayurveda, the ancient Indian system of holistic medicine and natural healing. The plant is mentioned in one of the oldest texts about sexuality. Ashwagandha has been known to increase healthy sexual interest in men since the time of Kama Sutra. Classified as an adaptogen, it has been used for over 3,000 years to help the body manage stress. Its botanical name is Withania somnifera, and it is also known as Indian ginseng and winter cherry.

A recent 2017 review verified the therapeutic use of ashwagandha for low libido, impotency, and also mental restlessness and brain fog. When low sex drive is worsened by stress or anxiety, ashwagandha is especially helpful.4,5

Eleutherococcus, a member of the ginseng family, is another adaptogenic herbal gift from nature that helps to improve libido and manage stress. One of the most extensively researched botanicals in the world, eleuthero root is rich in antioxidants and saponins that help to encourage a healthy sex drive, balance hormones, and support robust adrenal function. Studies show that feeling overly stressed, or a weakened ability to cope with life stresses, directly impacts libido. Eleuthero as an adaptogen helps normalize sexual interest naturally and to exert a sense of calm.

In Traditional Chinese Medicine (TCM), eleutherococcus is believed to increase Qi, or vital energy, to encourage a healthy appetites including desire for intimacy, and to improve sleep. Like other adaptogens, eleuthero is best when used for several months at a time to allow it to build up in the system. Over time, eleuthero strengthens the body, supports a robust libido, increases endurance, and encourages recovery from chronic stress or overwork.

Vitamins B5 and C enhance the actions of rhodiola because they are essential cofactors for the adrenals to make correct amounts of their hormones. These vitamins are necessary for optimal testosterone-to-cortisol ratios, and thus for maintaining male hormone balance that is needed for a healthy libido. Men who eat a poor diet including processed foods and excess caffeine can suffer from lower levels of these vitamins.

In our clinic, our male patients generally report better improvements in libido from taking rhodiola when they include a blend of ashwagandha and eleutherococcus along with balanced doses of vitamins B5 and C, for 3 to 6 months. These men frequently say they feel increased ardor as their adrenal function stabilizes, sleep improves, and energy builds up steadily over several months or longer.

Recommendation: A formula including a daily dose of: Rhodiola rosea extract (standardized to contain 3% rosavins, 1% salidroside) 200mg; Ashwagandha root extract (3.5% with anolides) 50-100mg; Eleutherococcus Senticosus (20:1) 25-50mg; with Vitamin C, buffered (ascorbate) 500mg; Vitamin B5 (calcium pantothenate) 50-100mg; Vitamin B6 (pyridoxal-5-phosphate) 25-50mg. Optional supportive ingredients could include: Astragalus root 100-150mg, Panax Ginseng extract (10% ginsenosides) 100mg, and Schizandra berry 75mg. This formula should be taken with breakfast or lunch, or divided between each of these meals, or as directed by your healthcare provider.