Erectile Dysfunction is helped by the Vitamin E family

For ERECTILE DYSFUNCTION, the Vitamin E family is a powerful antioxidant and vascular tonic that protects penile blood flow, and supports stronger and more enduring erections. 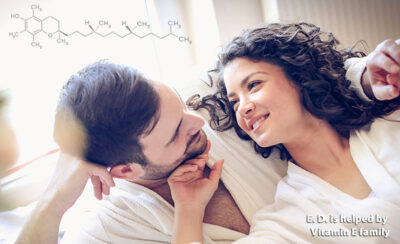 The vitamin E family is a group of related substances that each have important actions and which work together in nature to enhance each other’s benefits. There are eight major forms of vitamin E that fall into two chemically related categories known as tocopherols and tocotrienols. These constituents of the Vitamin E family are: alpha, beta, gamma, alpha, beta, and delta tocopherols, and alpha, beta, gamma, alpha, beta, and delta tocotrienols. We know that these eight forms of vitamin E need each other to work effectively, and their bioavailability to the body is greater than if only simple d-alpha vitamin E is used.

The vitamin E family has numerous benefits for men with blood flow disorders although it is highly dependent on the type and form of vitamin E that is consumed. While the natural tocopherols have documented health benefits as antioxidants, hormone modulators, and immune supporters, research shows that alpha, beta, gamma, and delta tocotrienols bring additional cardiovascular and nerve benefits to help erectile function that tocopherols lack. Studies that showed vitamin E supplementation having limited benefits used only alpha-tocopherol which has minimal action on its own, without the synergistic presence of the other tocopherols and tocotrienols. When taking a vitamin E supplement, men will receive vastly more benefit from a formula that includes both alpha- and gamma-tocopherol, along with the other tocopherols and all the tocotrienols. We stringently avoid the d-l-alpha synthetic versions, these never exist in nature and their safety is questionable.

An erection and sexual arousal is a result of complex interaction between multiple systems including the nervous system, muscles, hormones, and emotions. Research shows that erectile dysfunction (ED) is a symptom, not a condition, and is considerably due to problems with blood vessels and impaired blood flow. Stress or diabetes can also impair blood flow to the penis and the ability to achieve erection. Plaque buildup in the pelvic arteries causes ED in about 40% of men over 50 years old. Because vitamin E reduces platelet clumping and is a blood thinner, it can reduce plaque formation in arteries including those of the penis and pelvic tissues.

The vitamin E family helps to prevent tiny clots of red cells or clumps of platelets, and stabilizes blood vessel cell membranes, so that penile blood entry is enhanced. Tocotrienols have particular cardiovascular benefits: they are known to promote new artery formation in tissues whose blood flow was compromised, and to protect nerves and vital brain circuitry, and to have properties that tocopherols lack. The vitamin E family also helps stabilize atherosclerotic plaques, if they do form, so they are less likely to burst or block an artery. The male sexual system is also protected by the actions of tocotrienols for reducing cardiovascular risk: Human research shows that tocotrienol supplementation can lower total serum lipids by up to 23%, and also can reduce dangerous forms of apo-lipoproteins, lipid-carrying proteins that increase cardiovascular risk; whereas alpha tocopherol has no effect on serum lipids.5 Tocotrienols may be more potent than folic acid for reducing levels of homocysteine, another important contributor to cardiovascular disease.

Dysfunction of the vascular endothelium, the thin layer of specialized cells that line blood vessels, is a hallmark of most conditions that are associated with atherosclerosis. Recent data indicate that endothelial dysfunction is often associated with erectile dysfunction, and the blood flow problems of ED can precede and predict future cardiovascular disease in men.4 The mixed natural vitamin E family encourages healthy function of the endothelium, which keeps the walls of the small blood vessels open and flexible, to enhance blood flow into the penis.

Research studies verify the role of oxidative stress in erectile dysfunction associated with aging, and the benefit of treatment with the vitamin E family. One research trial investigated the effect of 80 IU of vitamin E for 21 days: The results confirmed that therapy with the mixed natural vitamin E family boosts blood flow to the penis and ameliorates age-associated erectile dysfunction by improving arterial pressure.1

A second study searched for markers of oxidative stress and examined the effect of long-term antioxidant intake on arteriogenic ED, meaning erectile dysfunction due to impaired arteries. Researchers determined that harmful oxidative byproducts from the body’s normal metabolic processes, or from environmental pollutants, can accumulate in erectile tissue. They found that tissue damage caused by oxidative molecules, known as oxidative stress, has great importance in the pathophysiology of arteriogenic ED. The researchers concluded that “Antioxidant therapy may be a useful prophylactic tool for preventing smooth muscle dysfunction and fibrosis in ED.” 2,3 This means that effective antioxidants, with the vitamin E family as one of the most potent, can help prevent fibrous tissue thickening that impedes blood flow into the penis. The exact mechanism of action of vitamin E in general and gamma-tocopherol in particular for ED awaits further studies. Its antioxidant and anti-inflammatory properties are proving significantly helpful for men who suffer with this condition.

In our clinic, patients with erectile dysfunction have enjoyed good long-term improvements with increased frequency of erections that are firmer and of longer duration, using the mixed natural Vitamin E family for 4 to 6 months or more. Using the International Index of Erectile Function (IIEF) questionnaire, our male patients regularly score significantly higher for achieving erection and enjoying satisfying intercourse. This is confirmed by research that verifies improved IIEF scores with sustained use of the vitamin E family.

Regarding media questions about the safety profile of ‘vitamin E,’ our view is that safety concerns apply strictly to the synthetic “dl” form, e.g. dl-alpha, a mirror image of naturally occurring vitamin E, which does not exist in nature. The “dl” variant may actually block the beneficial “d” form from entering cells. We recommend only the eight-constituent mixed natural form, and never the dl-alpha variant. We particularly like a guaranteed non-GMO formula, in an absorbable and gentle base such as sunflower oil, with large enough amounts of tocotrienols to be effective.