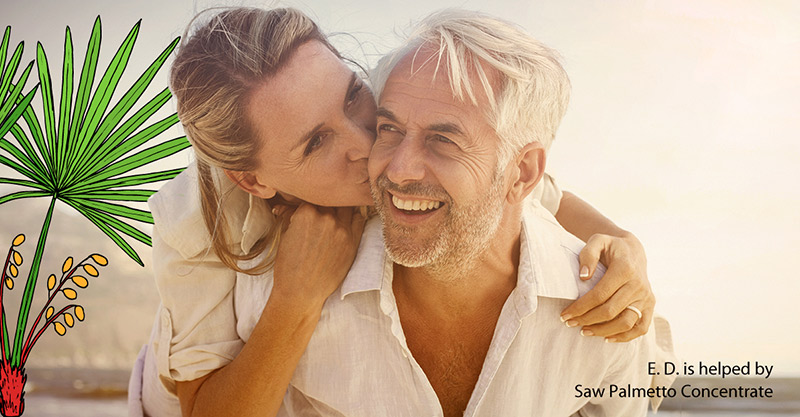 Saw palmetto is a very well-researched botanical with a rich history of use treating sexual problems in men, such as loss of libido and impotence. It is clear from scientific data that this herb can help improve erectile function, along with mild to moderate cases of enlarged prostate. The National Institutes of Health (NIH) estimates that about 5% of 40-year-old males and 25% of 65-year-olds experience erectile dysfunction long term. However, it is also common for men of all ages to experience occasional erection problems, and it is comforting to know there exist safe, natural alternatives.1

Saw palmetto, also known as the American dwarf palm tree, is a tree native to the West Indies and the southeast coast of North America. It grows to a height of 6 to 10 feet and is characterized by thorn-shaped leaves that are arranged like a fan. The berries, which are maroon colored and oblong shaped, have been used for more than a hundred years for erectile function, male potency, and prostate symptoms. Native Americans from the Seminole tribe traditionally ate saw palmetto berries for food and to treat men’s urinary, erectile, and reproductive problems. Now saw palmetto is one of the most widely used botanicals in the world, by over two million men in the U.S. alone. Saw palmetto has a strong research track record, with up to 90% of men getting relief for mild to moderate erectile dysfunction or prostate symptoms. In Germany, Austria, and Italy, saw palmetto is used as a first-line treatment for men’s reproductive and prostate conditions, including erectile responses. Its extract is believed to be a highly effective androgen stabilizer due to the phytosterols it contains. Saw palmetto’s action is enhanced by the herbs pygeum and nettle root.

Research trials verify that saw palmetto inhibits 5-alpha-reductase activity on testosterone in vitro, preventing the conversion of testosterone to its overly-aggressive breakdown androgen hormone called dihydrotestosterone (DHT). By slowing down 5-alpha reductase, saw palmetto could reduce the effects of DHT as men get older and research verifies this. One open, randomized, placebo-controlled study indicated that saw palmetto can reduce DHT levels in the plasma. Lower DHT allows a better hormonal environment for optimal blood influx into the penis, and stronger erections.

A 2004 review published in The Journal of Urology analyzed 30 in vivo and in vitro laboratory studies, and noted that the frequency of use of saw palmetto globally for medical treatment of men’s disorders, including erectile dysfunction, low libido and BPH, matches the use of conventional drugs. The studies confirm that saw palmetto has a wide spectrum of activity and works via numerous mechanisms. These include subduing excess testosterone and DHT, and a known anti-inflammatory action. While the precise biochemical mechanisms of action are still being clarified, the review concludes that saw palmetto is clearly effective and beneficial for erectile function. It is licensed and used widely throughout Europe for symptomatic men’s health conditions.2

Studies involving in vitro research with serenoa extracts found that both forms of saw palmetto, called isoenzyme I and II, can inhibit 5-alpha-reductase activity. A modest but significant decline in DHT levels was observed after six months of a placebo-controlled trial involving 40 men. Di Silvero and colleagues found that saw palmetto decreased epidermal growth factor, leading to reduced tissue levels of DHT, which can then improve erectile function.3

In anti-aging medicine, saw palmetto is also being used for hormone restoration in place of testosterone, which if given in excess can elevate cholesterol and DHT. Together with zinc, saw palmetto can safely help to balance a host of male hormones including testosterone, pregnenolone, dehydroepiandrosterone (DHEA), progesterone, cortisol, and estrogen. Keeping these hormones in proportions closer to those naturally occurring in younger men enhances the ability to achieve and maintain longer lasting erections.

A 2013 study found that saw palmetto had a beneficial effect on 82 men with moderate to severe sexual symptoms including erectile dysfunction as well as benign prostate enlargement. The men were assigned to take 320mg daily of saw palmetto extract daily for eight weeks. At the end of eight weeks, the International Index of Erectile Function (IIEF-5) was significantly improved by 51%, and erectile dysfunction and other sexual functions were better by an average of nearly 40%. The widely-used IIEF-5 asks men to rank their confidence in achieving erection, their success with penetration, and their satisfaction with intercourse. For men in this study, their International Prostate Symptom Scores (IPSS) were also lower, registering better bladder emptying and urination. According to the research urologist, “This is one of the first therapies ever to show an improvement of sexual dysfunctions along with BPH symptoms at the same time.”4

Clinical trials are indicating that the action of saw palmetto to boost nitric oxide in penile blood vessels is a significant factor for helping erectile function. It is well-known that older men can suffer a decline in sexual function involving loss of libido or difficulty obtaining an erection. This is often attributed to decreased blood flow to erectile tissue due to narrowing of the arteries. Although the activity of saw palmetto to increase inducible nitric oxide synthase is still being explored in studies, it would explain the significant reports of improved pelvic circulation and sexual function by men receiving saw palmetto in research trials.5

Numerous clinical studies with thousands of men have documented that the benefits of saw palmetto can build over time: One study published in the New England Journal of Medicine found that sexual function was significantly improved during the second year of two years taking saw palmetto. Men taking saw palmetto were checked at six, twelve, and 24 months and at each stage their quality of life and sexual functions improved more, while prostate symptoms continued to decrease over two years. Compare this to the common drug finasteride (Proscar) which causes erectile dysfunction for about 5% of users. This report suggested that saw palmetto is generally most effective for moderate versus very advanced symptoms.6

In our clinic, we look for a minimum of 144mg of saw palmetto sterols daily, (160mg at 90%, or 320mg at 45%). This regularly offers our patients ongoing improvements with erectile function. Our male patients report attaining erections faster, keeping them for longer, and more satisfactory intimate encounters. We see significantly better results for erectile function if pygeum and nettle root are added, which magnify the benefits of saw palmetto. Stinging Nettle modulates androgen receptors and inhibits enzymes to effectively treat symptoms of excess testosterone. Pygeum (Prunus africana) Bark Extract has hormone-balancing effects and also inhibits 5-alpha reductase, leading to reduced inflammation and enhanced healthy blood flow to the penis. Pollen concentrate has powerful anti-inflammatory benefits, and it supports increased blood inflow to the penis.

Recommendations:
Saw Palmetto 320mg standardized to >45% total sterols, or 160mg at 90%, once or twice daily, best absorbed between meals, or as directed by your healthcare provider.