For ERECTILE DYSFUNCTION, the very safe and effective herb pygeum can greatly help with achieving and maintaining erections, especially for men with prostate hypertrophy or prostatitis. Pygeum probably acts by reducing inflammation and enhancing healthy blood flow. Also pygeum standardized for high amounts of its active constituents can help male fertility and sperm longevity because it improves the quality of seminal fluid and boosts healthy prostate secretions. 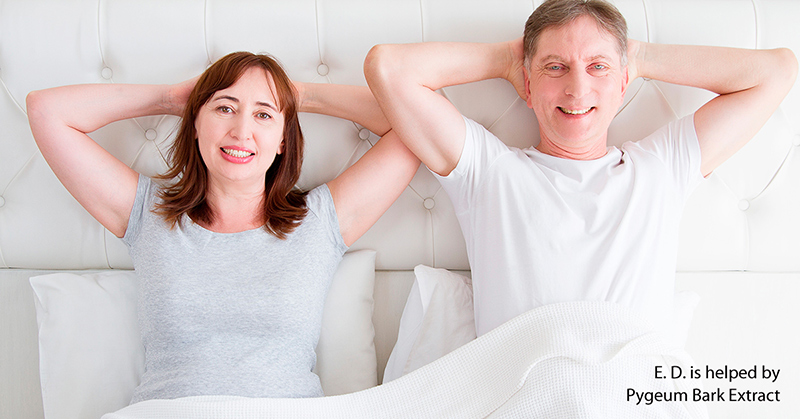 Pygeum is a large evergreen known as the African cherry tree, native to central and southern Africa, which grows to up to 150 feet. For thousands of years, traditional African healers have used the bark for its healing properties for male potency and its aphrodisiac qualities. Historically, the powdered bark was made into a tea. In the 1960s, Europeans began using pygeum bark extract and this ancient supplement has subsequently caught the attention of healthcare professionals and healers in many countries worldwide.

Studies show that standardized pygeum can improve a man’s capacity to achieve and maintain an erection. It accomplishes this by several mechanisms:

Modern research shows that testosterone is the most important androgen for achieving erections. The effect of androgens on the physiology of the penis has been a topic of discussion for many years. In the context of several specific studies, one review sought to “examine the intriguing hormone DHT and its role on erectile capability.” The authors concluded that androgens are vital for the development, maintenance, and function of penile tissue and regulation of erectile physiology. However, the critical androgenic substance for these effects is testosterone rather than DHT.1 The main active constituents of pygeum bark are fatty acids and fat-soluble sterols called phytosterols. These phytosterols inhibit the body’s production of the androgen dihydrotestosterone (DHT), a potent breakdown product of testosterone, and prevent it from counteracting testosterone’s benefit for erectile function.

Pygeum has been shown to block the number of receptor sites where DHT can attach to cells. There is gathering research to confirm its benefit for ED. In one study of men with sexual dysfunction due to either benign prostatic hyperplasia or chronic prostatitis, 18 patients received pygeum extract for 60 days, either alone or with antibiotics. The men receiving pygeum bark extract experienced improved sexual function and nocturnal penile rigidity, even though there were no significant differences between hormone levels before and after therapy. Based on their findings, the researchers believe that pygeum can have a tonic effect that boosts erectile capacity, apart from benefits on testosterone levels, which can be beneficial to patients with sexual dysfunction.2

In research studies pygeum has been found to boost sexual function, and this may be due to the presence of active ingredients like terpenes, N-docasanol and beta-sitosterol in the bark of the pygeum tree. In one trial, extracts of pygeum and nettle root both partially blocked the action of two enzymes, aromatase and 5-alpha-reductase. These enzymes lead to the production of estrogen and dihydrotestosterone (DHT), respectively. Pygeum showed much higher efficacy at lower doses for blocking the aromatase enzyme than did nettle root; the combination of both herbs was significantly more effective than either alone.3

In our clinic, our male patients taking pygeum for at least 4 to 6 months have reported significantly increased scores on the International Index of Erectile Function: This is a set of fifteen questions rating the frequency of attaining an erection, and the level of satisfaction with penetration and intercourse. In addition, these men often have markedly improved testosterone levels.

We have also found that the actions of pygeum used at a high dose of 650mg for erectile function are enhanced by a number of complementary herbs.

Stinging nettle, specifically the root, balances the proportions of testosterone and DHT, to favor better erectile capacity. Also nettle root can prevent sex hormone-binding globulin (SHBG) from attaching to male tissues and can block dihydrotestosterone (DHT) from binding to SHBG. This all favors an optimal testosterone-to-DHT balance that supports achieving and maintaining erections. In addition, nettle root polysaccharides have a good anti-inflammatory effect: They stimulate helpful T-lymphocytes, and impede HLE (human leukocyte elastase) which is one of the most destructive enzymes from white cells that enters tissues to trigger the inflammatory process.

Saw palmetto has been found to help men’s sexual problems. It had a beneficial effect on 82 men with moderate to severe erectile dysfunction who were assigned to take 320mg daily of saw palmetto extract daily for eight weeks. At the end of the eight weeks, erectile dysfunction and other sexual functions had improved by an average of nearly 40%. According to the research urologist, “This is one of the first therapies ever to show an improvement of prostate symptoms and of sexual dysfunctions at the same time.”3

Pollen concentrate encourages blood flow to the penis via its powerful anti-inflammatory benefits.

Recommendations:
Pygeum Bark Extract 500 to 650mg daily total, standardized to at least 45% total sterols, best absorbed between meals, any time of day, or as directed by your healthcare provider.