Erectile Dysfunction is helped by L-Carnitine 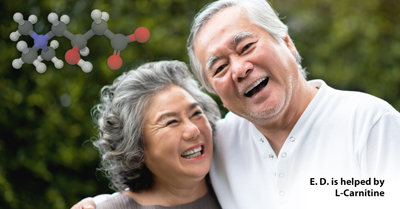 Propionyl-L-carnitine is an amino acid that is naturally produced in the body: amino acids are the building blocks that form proteins. This particular amino acid is critical to providing fatty acids to the mitochondria in each cell that fuel energy production. There are several types of carnitine but for circulatory benefits, such as are needed for erectile dysfunction (ED), L-carnitine boosts the production of vascular or cellular mediators such as nitric oxide. This results in improved blood flow to the erectile tissues, the corpus cavernosus and corpus spongiosus in the penis, improving the ability to maintain an erection.

We can get small amounts of L-carnitine from our diets by eating meat and fish, but not enough for a therapeutic effect on male sexual functions. Vegetarians and vegans can especially benefit from L-carnitine supplements, as can older adults as carnitine levels in the body decline as men age. Researchers compared L-carnitine with testosterone in men who were experiencing erectile dysfunction, low libido, fatigue, and depression. They found that after six months of treatment, L-carnitine was more effective at improving erections and sexual performance than testosterone, though the hormone helped somewhat. More importantly, testosterone had the problem of causing an increase in prostate volume and size, while L-carnitine did not.1

Another study from Italy reinforced the data that L-carnitine can enhance erections at least as effectively as doses of testosterone. To compare hormone treatment and placebo, 120 patients were divided into randomized groups. Taking carnitine, in two forms called propionyl-L-carnitine and acetyl-L-carnitine, at 2,000 mg per day each, improved erectile firmness and duration, exceeding the benefit from oral testosterone. Carnitine proved significantly more active than testosterone in improving nocturnal penile tumescence and raising the men’s International Index of Erectile Function score (IIEF). This is derived from a 15-question survey in which men rate their ability to attain and keep an erection, and to complete intercourse to their satisfaction. Interestingly, both testosterone and carnitine also yielded equal improvements in mood and energy.1

According to a 2012 study, the application of nutraceuticals, or therapeutic nutritional compounds, in the field of erectile dysfunction and male sexual physiology remains relatively underexplored. Researchers selected 54 men presenting with ED to evaluate the effects of a 3-month supplementation with L-carnitine, enhanced by L-arginine and niacin, on their sexual performance. Analyses revealed that treatment brought major improvement to achieving and maintaining erections in 40% of men, with at least a partial response occurring in up to 77% of subjects enrolled. These findings indicate that the favorable cardiovascular effects of L-carnitine and other nutraceuticals enhance male sexual function, with very helpful implications in the treatment and prevention of ED.5

In our clinic, we have seen consistent long-term benefits with L-carnitine for patients with erectile dysfunction: Men commonly report increased ability to attain erections, which happen faster, last longer, and more often allow for sustained penetration. These improvements appear to steadily increase with 3 to 6 or more months of taking L-carnitine. On the International Index of Erectile Function (IIEF) questionnaire, our male patients frequently boost their scores that measure their satisfaction with achieving erection and enjoying intercourse. Clinical research confirms better IIEF scores with ongoing use of L-carnitine.

Recommendation:
L-carnitine 1,000mg per day, with any meals, or as directed by your healthcare provider.