Erectile Dysfunction is helped by Ginkgo Extract with whole leaf 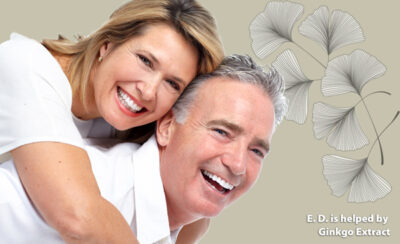 For men who have both erectile dysfunction and depression, studies have found ginkgo to be especially effective: Improvements in male sexual function occur in up to 76% of men taking ginkgo along with antidepressants. The Selective Serotonin Reuptake Inhibitor (SSRIs) class of antidepressants can inhibit neurotransmitters involved with erection. They also inhibit the release of nitric oxide in erectile tissue which is directly responsible for the maintenance and initiation of erection. Gingko appears to act by reversing the inhibition of an enzyme called nitric oxide synthase, which can be suppressed by antidepressants.3 This enzyme is crucial for production of nitric oxide, and for maintaining healthy blood flow throughout the body.

In our clinic, many male patients have recovered erectile function with ginkgo. We have found it to be especially effective for men experiencing ED after prostate surgery, where ginkgo helps to repair damaged nerve pathways. In addition to its effects on vasodilation, ginkgo has been found in research trials to significantly improve recovery from nerve injury following prostate removal. In order to get maximum benefits, clinical studies show that ginkgo needs to be taken consistently for at least 4 to 6 weeks to build up to maximum tissue levels and to exert its full effects.