Erectile Dysfunction is helped by Buffered Vitamin C with Bioflavonoids

For ERECTILE DYSFUNCTION, vitamin C with bioflavonoids helps to increase blood flow to the erectile tissues, improving the ability to maintain an erection, and is a highly effective antioxidant. Vitamin C also boosts nitric oxide (NO) production and prevents NO breakdown, so that penile blood vessels dilate readily. 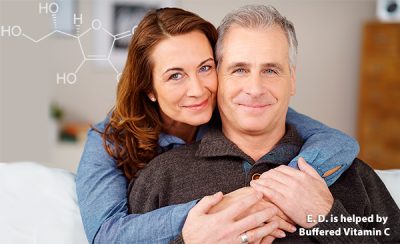 Vitamin C, also known as ascorbic acid, is a powerful antioxidant, tissue protector, and is essential for forming collagen, the main constituent of connective tissue, to keep blood vessel walls strong. This ensures steady blood supply to the pelvic organs and all other body tissues. Because vitamin C is naturally a very mild acid, it is even better absorbed when it is formulated with minerals such as magnesium or potassium that act as buffers. The benefits of vitamin C for pelvic blood flow and protection against oxidative damage are magnified by bioflavonoids, which are usually found together with vitamin C in fruits and vegetables. Bioflavonoids are biologically active plant pigments that give fruits and flowers their colors. They enhance the absorption of vitamin C, and improve its utilization throughout the body. Because they also improve circulation in their own right, they are a remedy for erectile dysfunction.

In our clinic, we choose water-soluble vitamin C in a buffered, low-acidity potassium-magnesium blend that is gentle on the stomach, with a pH of ideally around 4.2. It is highly absorbable, and far more rarely causes loose stools than other vitamin C formulas. We like to include bioflavonoids with vitamin C, as these plant pigments enhance the actions of vitamin C and bring extra benefits for erectile function. We have observed patients with erectile dysfunction reporting gradual improvements over time on vitamin C with bioflavonoids, experiencing more frequent erections that are sustained for longer. These men give themselves notably higher scores on the International Index of Erectile Function (IIEF) questionnaire, after 6 to 12 months of vitamin C, attaining erections more easily with better penetration and more frequent intercourse.

Recommendation:
Buffered vitamin C 1,000mg, buffered with magnesium and/or potassium, including citrus Bioflavonoids 100-200mg, one to three times daily with any meals, or as directed by your healthcare provider.