For LOW SPERM COUNT, an antioxidant carotene-rich multivitamin will support healthy sperm production and sperm motility, and help men increase their reproductive health and fertility. Approximately 30 to 80% of infertility cases are caused by oxidative stress, damage to tissues oxidation-causing molecules, and by a decreased antioxidant capacity of semen.1 This means that the seminal fluid has less ability to protect sperm from oxidative injury, leading to shortened survival and a reduced number of sperm. A multivitamin with rich amounts of antioxidants, including natural mixed carotenes, vitamin C, E, and selenium, is shown to effectively improve semen parameters in infertile men. 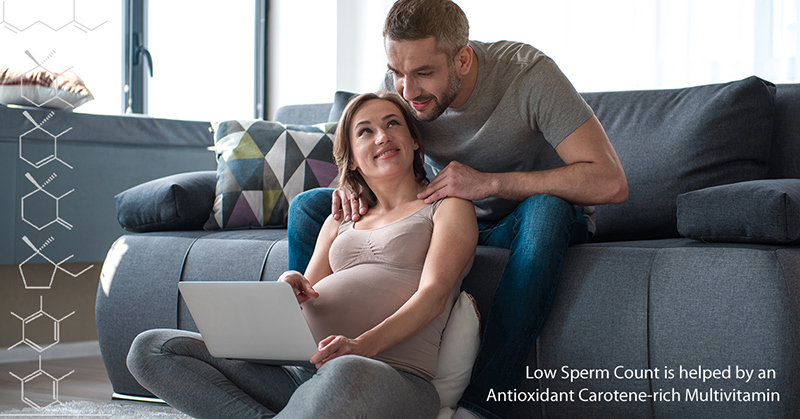 Sperm are particularly prone to oxidative damage since they naturally generate reactive oxygen species (ROS) as part of their innate metabolic processes. Sperm also have a high polyunsaturated fat content and fats are especially vulnerable to oxidation. In addition, sperm have reduced capacity to repair their own DNA damage. Increased ROS production in sperm and reduction in their free radical scavenging leads to oxidative injury and can cause infertility in men.2 The dietary compounds vitamin E and beta-carotene have antioxidant properties that can counter the damaging effects of excess ROS.

Natural carotenes are a group of red, orange, and yellow pigments found in the chloroplasts and chromoplasts of plants including fruits, vegetables, algae, and whole grains. They shield plants from sun-induced free radical damage, providing powerful protection for a lifetime in the sun. Plant carotenoids are water-soluble and do not accumulate in our bodies, so toxicity is almost unheard of. More than five hundred carotenoids are known, some of which convert into active vitamin A in our tissues.

For high antioxidant delivery, our clinic prefers a multivitamin with the full range of purely natural mixed carotenoids, including cis and trans beta-carotene isomers, alpha-carotene, zeaxanthin, cryptoxanthin and lutein, all of which are potent antioxidants. We will not use any product with synthetic beta-carotene which has been shown to be relatively ineffective and potentially unsafe. Along with other antioxidants such as vitamin C and selenium, carotenes including lutein help protect all cells and tissues from scavenging free radicals, reduce oxidative stress and cell damage, and decrease harmful lipid peroxides They boost the cells’ own protective glutathione levels, and superoxide dismutase and catalase enzyme action.

Carotenes from plant sources convert into as much vitamin A as the body needs, with no risk of overdose. Dietary carotenoids have a high antioxidant capacity, so natural mixed carotenes are highly effective for protecting sperm from oxidative damage and thus improving sperm production and quality. With the knowledge that carotenoids combat free radical damage, researchers in a 2015 study sought to better understand the protective role of carotenes for male infertility. Sixty-two infertile men and 71 normospermic men participated in this study: Their serum levels of lycopene, beta-carotene and retinol were compared against sperm health, especially DNA damage and lipid peroxidation in sperm. Researchers compared serum levels of antioxidants in both groups of men. They concluded that beta-carotene can protect sperm integrity and enhance healthy sperm count. Carotenes work by reducing sperm DNA fragmentation and lipid peroxidation through an antioxidant effect.3

Additionally, we like a formula with an array of other antioxidant nutrients known to be sperm-protective. Vitamin C has direct action against ROS helping to prevent harmful levels from accumulating in the body. There is evidence that vitamin C improves semen quality, as it counteracts oxidative stress and damage to sperm. A notable 2006 study measured various semen parameters including sperm motility, sperm count, and sperm morphology in infertile men. After two months of taking 1,000mg of vitamin C twice a day, the men’s average sperm count increased by more than 100%, a huge improvement, and their sperm motility jumped by 92%. Vitamin C also reduced the proportion of deformed sperm cells by 55%.6

An observational study in 2012 looked at Indian industrial workers made infertile because of lead exposure. The results indicated that taking just 1,000 mg of vitamin C five times a week for three months significantly improved sperm count and motility, while reducing the numbers of deformed sperm cells.7 Vitamin C has been shown to protect sperm cells against DNA damage caused by ROS.

Along with other antioxidants, vitamin E can have powerful benefits for protecting sperm from oxidative injury, and for improving sperm quality and viable sperm number. Additionally, supplementing with selenium enhances semen quality, increases the number of healthy sperm, and has beneficial and protective effects, especially on sperm motility.8

In our clinic, we have seen excellent improvements in sperm count using a balanced blend of these antioxidant-boosting nutrients for our male patients. A significant number of them have been measured with better motility, fewer flawed sperm, and improved pregnancy rates with their partners over time.